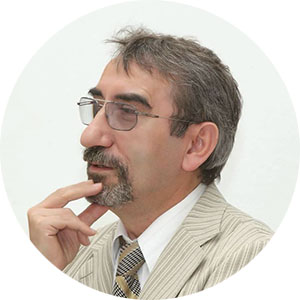 Yuri Grigoryan lives and works in Moscow. In 1969, he graduated from the Theater Department of the Moscow Art School 1905, and in 1976 – Moscow Art Institute named after V.I. Surikov, workshop Professor N. Ponomarev.

Two monographs have been devoted to creativity of Yuri Grigorian, although full bibliographic list includes more than 40 names. Among the authors: leading art historians and journalists of the country, writers. In the family archive of the artist, there are written confessions of sympathy to his works by Aram Khachaturian, Yuri Dombrowski, Andrei Dementiev. As before, most recently Yuri Grigoryan is active in exhibition activities, successfully participates in international auctions.

In August 2006, he was awarded with the title “Honored Artist of Russia” presidential decree.

In October 2010, he received the title of Corresponding Member of the Russian Academy of Arts.

In 2018, he was awarded the Gold Medal of the Russian Academy of Arts.

In 2022, he was awarded the title of full member (Academician) of the Russian Academy of Arts.

Works of the artist Yuri Grigorian are stored in:

Do you want to purchase a painting?